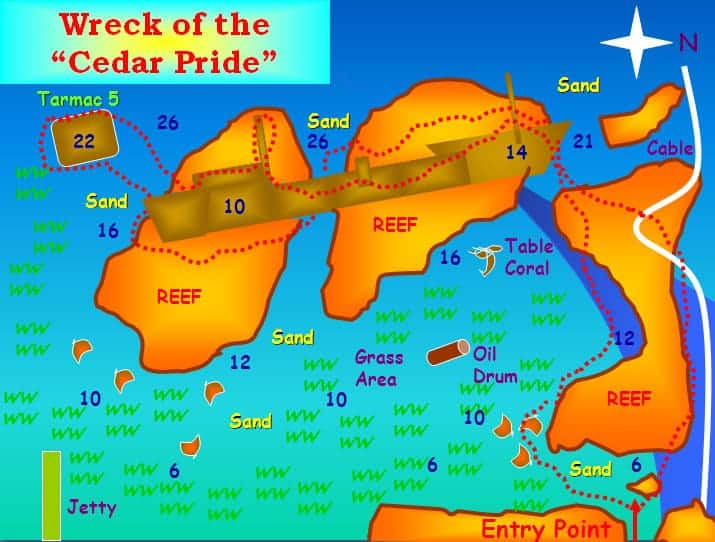 The Cedar Pride wreck Aqaba, Jordan is one of Jordan’s most popular and celebrated dives.

A former Lebanese freighter, the ship sustained extensive damage during a fire in 1982. Following a request from King Abdullah, the ill-fated vessel was deliberately sunk approximately 200 m offshore as an artificial reef for divers.

Lying on its port side at a maximum depth of 27 m across two reefs, the wreckage has been colonized by numerous hard and soft corals.

It mark by a surface buoy, you can access the Cedar Pride from boat or shore. The uppermost starboard side is at 10 m, and so provides a great site for both novice and experienced divers alike. The wreck is largely intact and around 80 m in length with the most interesting diving on the seaward side. Also here you can see the deck and superstructure.

The outstanding feature is the crow’s nest. The nest covered with a profusion of colorful soft corals and stands out against the clear blue water. Therefore as you continue further towards the hull, you pass mushroom ventilation shafts and the main mast. Here in the deeper water, the soft corals more dispersed but replaced by hard corals and schools of fish. They including the odd barracuda. As you swim back along the uppermost starboard side, you can find plenty of hard corals and small animals. They have made their home on the hull, including anemones, table corals, pipefish and clusters of acropora. This makes for an excellent night dive.

The deck smothered with lots of critters, including urchins, shrimps, Spanish Dancers and soft coral crabs. For the experienced wreck diver and  photographer there are
many penetration opportunities within the light zone.

The ship launched in 1964 at the S.A. Juliana Constructora in Gijon, Spain as the "Mone Dos". This is 74 meters long general cargo vessel of 1,161 tons served the Naviera Anzar Shipping Company of Bilboa. Until 1969 when it became the "Puerto De Pasajes" , with a further name change in 1978 to the "San Bruno". Then it purchased by the Lebanese Cedar Pride shipping company, taking on the company name ~ its 4th and last.

In July of 1982 Cedar Pride arrived at the Jordanian port of Aqaba. Unfortunately on the 2nd August while at anchor and in ballast a fire spread rapidly through the engine room and accommodation area's. Two of the crew lost their lives.
The damage from the ensuing blaze left the ship as a total constructive loss. Although the hull was still intact and it was still afloat. For the next three years ship remained a floating hulk, no one accepting the responsibility for her mooring and harbor fees.

The King of Jordan himself, a keen diver, took an interest in the vessel and a plan hatched to sink the ship. In the hope it would become a part of the reef. Also to become a habitat for the rich marine life living in this quiet little backwater of the Red Sea.

With the waters around Jordan plummeting away in depths beyond the sports divers reach. There were no natural wrecks for divers to explore. The Cedar Pride changed that.

The ship itself prepared by the port, pumping off oil, removing any hazards and so on. They did a very good job indeed, so divers would not have any problems in the future.

Next a suitable site had to be found. Now this posed a bit of a problem, as their was no text book available. There were many questions. How to sink a ship in the Red Sea or any other sea?  How to sink a ship on a coral reef causing as little damage to the reef as possible, with the ship in one piece and in the upright position, horizontal to the shore, with a dive ceiling of 20 to 30 meters from the resting area.

The wreck of the Cedar Pride scuttled for divers on November 16th 1985. And it lies on her port side with the bow to the North. The marine life is good and photo possibilities endless. Best area is the main mast at about 12 meters.
The bottom of the stern is at 16 meters and the bow at 21 meters. There is a swim though under the wreck at 26 meters. Penetration is possible with the correct procedures.