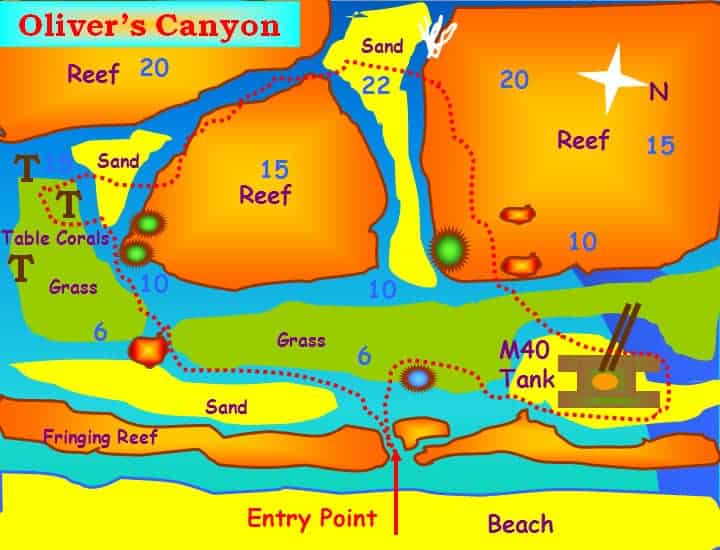 New Canyon  Aqaba and Hercules C130 dive site usually consists of a route around the canyons. Also with a tour around a series of table corals at varying depths. The site has a wide array of coral species and fish including lots of Scorpion fish, Frog fish and Stone fish. In addition to the odd Octopus and large Eel here is new wreck air plan C130 Hercules.

With an average maximum depth of around 16 meters and a flat bottom. The Hercules is upright and almost level, with a length of 30 meters and a wingspan of around 40 meters. The site is prone to only the lightest of currents.

Hercules C130 military aircraft has scuttled off Aqaba, Jordan to create a new artificial reef for divers in the Gulf of Aqaba in the Red Sea.

The Aqaba Special Economic Zone Authority, in cooperation with the Royal Jordanian Navy and the Aqaba Port Corporation, sank the plane on November 16, 2017. It is approximately 300 meters off the coast.

The Hercules C130 now lies at a depth of around 17 meters. Over time, it became an artificial reef that attracts fish, coral and other marine species as well as divers from all over the world. The Hercules C130’s proximity to the M42 Duster tank wreck also makes it a premiere dive location in the Gulf of Aqaba.

Before the sinking, Aqaba Special Economic Zone Authority removed all fuel, oil, paint and hazardous materials from the aircraft. In order to comply with environmental best practice. The aircraft towed from the Royal Jordanian Air Force’s headquarters in Amman to Aqaba. For  repurposed for its new life as an artificial reef.

“The entire marine ecosystem benefits from creating an artificial reef like the C-130 Hercules,” said H.E. Mr. Sharhabeel Madi Commissioner of Tourism and Economic Affairs. “Whenever we are able to add a new structure like this, the whole area benefits from the added habitat and species diversity.”

Sometimes called " New Canyon " although it is very old! New Canyon got its name after German PADI Instructor " Oliver Wolf ". He discovered the site by accident looking for Eel canyon from the shore! Hence the name " New Canyon " by other centers who then saw us diving somewhere new! The dive starts at two blocks of coral known as " the twins ". After have a quick look around here the dive can continue with a circular route around the two canyons. With a tour around the table corals (once referred to as walking through Grannies garden).

Magnificent species of scorpion fish, stone fish, frog fish, octopus and large eel find shelter in this site. More popularly known as ” The Tank ” This American M42 Duster with a self propelled Anti-aircraft canon was originally in employ of the Jordanian Army.